The skill of early Scottish stonemasons is evident in the picturesque town of Perth, Ontario. Evidence of their enduring craftsmanship is seen in many of the classic limestone buildings lining the streets of this county town. One such building is Code’s Mill, located in the heart of Perth. Situated on the Tay River this prominent structure overlooks Stewart Park, one of the town’s most beautifully landscaped areas.

Code’s Mill represents over 150 years of manufacturing activity and is a significant example of industrial architecture. The first industrial process on the site was operated by the Kilpatrick family beginning in 1842. Over time, the building complex evolved and is actually a collage of five different buildings constructed between 1842 and 1932. The three-storey portion facing onto Herriott Street is the most prominent. Built in 1903, the grand Edwardian façade is composed of the distinctive Hughes limestone, a lavender tinted stone unique to Perth. The building described at the time as “the most handsome building in Eastern Ontario” dominates the corner at Herriott and Wilson Streets.

In the 1883, Mr. T. A. Code established Codes Custom Wool Mill with a range of processes, including:  carding, spinning, fulling, shearing, pressing, and coloring of yarns. In 1896, its name was changed to the  Tay Knitting Mill, and it produced yarn, hosiery, socks, gloves, sporting-goods, sweaters, and mitts.  Another change came in 1899, when a felt-making process was introduced and the mill was renamed  Code Felt. The company continued to operate until the closing of the factory in 1998. 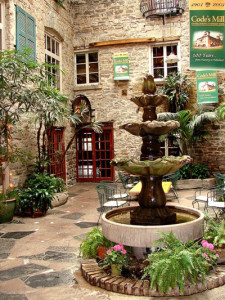 The following year, John Stewart began a major restoration and introduced new uses for this landmark. This impressive limestone complex with its central atrium now has an interesting mix of commercial tenants, including Fiddleheads Bar & Grill, Groundwaves,  Coutts Coffee, Kelly’s Flowers & Gift Boutique, the Curly Red Head, Code’s Mill on the Park, and Ottawa Mortgage Brokers. From its beginnings as a tannery to its present splendor, Code’s Mill is a destination worth visiting.